Deprecated: htmlspecialchars(): Passing null to parameter #1 ($string) of type string is deprecated in /var/www/vhosts/test.pmi-gc.de/httpdocs/modules/mod_search/mod_search.php on line 44

As regional as possible, as central as necessary

We are the largest project management forum in Germany. With more than 3,300 members, the chapter area covers the whole of Germany. The success of the PMI Germany Chapter stands and falls with the organization of events, projects and working groups on a regional and local level. Accordingly, it is imperative for us to organize ourselves in regions and to achieve a good balance between local service provision and supra-regional orientation. Within the framework of local services, the regions have maximum autonomy of action to best meet the needs of our members. 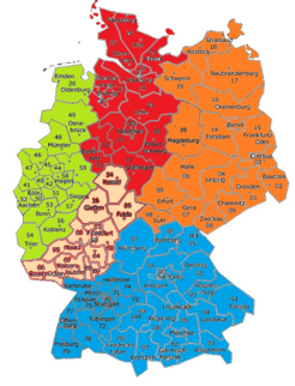 Region Nord covers the Northwest of country with local Local Groups in Hamburg, Hannover and Braunschweig/Wolfsburg.

The Region East covers the new German federal states. With five Local Groups, we organize more than 30 events a year. Particularly noteworthy is the support of the Berlin metropolis. We are locally present in all new federal states and bring our members together in various formats.

The Central Region covers the southern part (from Kassel) of the former Frankfurt Chapter and consists mainly of the states of the federal states of Hesse, Saarland and parts of Baden-Württemberg, Bavaria and Rhineland-Palatinate. This unusual layout of the area ensures that metropolitan regions such as Frankfurt/Rhine-Main and Rhine-Neckar are served from a single source.
The four  Local Groups Rhine-Neckar/Heidelberg, Southwest/Saarbrücken, Darmstadt and Frankfurt organize more than 40 events per year with a focus on the Rhine-Main area.

The West Region covers the western and north-western part of Germany and includes in particular the states of North Rhine-Westphalia, parts of Lower Saxony and Rhineland-Palatinate. The Rhine-Ruhr and Cologne metropolitan regions in particular fall within this area. Due to the regional character, topics from the area of plant and mechanical engineering form a focal point of the work of the local groups in this region. However, media production and the financial sector are also strongly represented in the region's membership through the metropolitan areas of Cologne and Düsseldorf. Dortmund and Cologne, in turn, are locations with a broad foundation in information technology. Not to be forgotten is also the North and East Westphalian area with its many "hidden" champions in mechanical engineering.

The Region West also tries to do justice to this diversity through a distributed structure of local groups and to reach as many members as possible from all industries and locations. Together with the region, the Local Groups currently organize around 30 events per year in the form of large regional meetings, Local Group meetings, workshops or round-table discussions.

If you are interested in setting up a Local Group yourself, even independently of the locations mentioned, simply contact the VP Region West informally by e-mail.

The Region South of the PMI Germany Chapter supports the business community in Southern Germany through the further development and dissemination of international and standardized methods of professional project management. The work in the region is supported by the Volunteers - these are chapter members who volunteer for the mission of the Southern Region: "We promote professional project management in Southern Germany through networking, qualification & social engagement!"

Due to the geographically broad expansion of Region South, seven local groups have been established to date, serving large catchment areas in Bavaria and Baden-Württemberg. Regular meetings take place here, where people interested in project management topics, in addition to the individual exchange, primarily shed light on professional topics through lectures and discussions. In addition to building networks and cross-industry knowledge, certified project managers can earn PDUs here - just as they can at the regular chapter meetings.

The volunteers of the Region South in the PMI Germany Chapter organize for the members, in addition to the regular roundtables and chapter meetings that are also common in other regions, also some larger events that are also known beyond the region and chapter borders and receive an increasing number of visitors: